The world is at cross roads vis-a-vis the turmoil and conflict it is engulfing in the health of the masses which still has gaps and the delivery of health care is inadequate.The nursing professionals have emerged as ‘Masiha’ who despite of all odds still serve and address the discrepancies of our system with much aplomb and grace.It is with this insight we need to deepen in the budding nursing professionals by exposing them to rigorous academic program which empowers them with adequate knowledge   and skill to set up benchmark in practice. 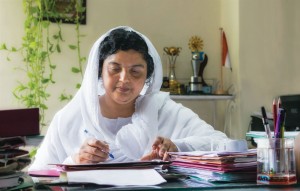 The day is not far off in India when nursing professionals will act as Nurses clinicians as in West to narrow this alarming gap and bring laurels to profession of Nursing Education and better health for humanity at large.Akal College of Nursing (ACN), Baru Sahib is unique indeed not only in terms of the divine pristine location but also as an emerging hub of academic excellence imbued with the spirit of humanism etched deep in its fibre.

Nursing Education at ACN has its impact in creating competent professionals who are committed to high degree of professional engagement and holistic healing. These emerging Nursing professionals need to be exposed to the inter-disciplinary approach of clinical research which will pave way for true scientific innovations for India as a nation. The order is tall, but worth exploring and achieving.

Let’s hold hands and move towards much needed fresh and energetic innovations in Nursing Education.

The 200th birth anniversary of Florence Nightingale, founder of modern nursing, falls on Tuesday, May 12. Her relevance today cannot be understated, given the Covid-19 pandemic. And yet the events leading up to the anniversary can only be called ironic.

Nightingale (1820-1910), who had considerable mathematical skills, is credited with being the first healthcare professional to use data to show that infection control improves health outcomes. Through her career she stressed a practice that is relevant as ever today — handwashing.

In 1840, Nightingale begged her parents to let her study mathematics instead of “worsted work and practising quadrilles”, but her mother did not approve of this idea (Archive of Mathematical History, University of St Andrews). Eventually, they did grant her permission to be tutored in the subject. Then in 1851, she resisted her parents and studied nursing, which was not considered a respectable profession in those days.

Her signature effort came during the Crimean War (1854-56), when she answered a government call for nurses and took a posting as ‘Superintendent of the Female Nursing Establishment of the English General Hospitals in Turkey’. This is where she earned the name ‘Lady with the Lamp’, for walking around patients’ beds at night, holding a lamp. This also where she did her pioneering work with statistics.

Florence Nightingale’s polar area diagram on deaths in hospitals during Crimean war compared areas to show that deaths due to disease exceeded those due to wounds.

When she arrived, diseases such as cholera and typhus were rife in the hospitals. Nightingale collected data, calculated the mortality rate, and showed that an improvement of sanitary methods would reduce the number of deaths. The mortality rate dropped from 60% to 42.7% by February 1855, and to 2.2% by the spring, according to the St Andrews archive.

She used her data to create graphics, the most famous of which is a polar area diagram (pictured) that used areas to represent variations in death rate. The blue wedges, representing death by sickness, are far bigger than those representing wounds.

“In the context of Covid-19 the first step is important. There has been a large difference in death rates between countries, and statistical analysis will show which country did best and what mistakes the other countries made,” Small (author of Florence Nightingale) said. (Article appeared in Indian Express on 11.05.2020)

Akal College of Nursing Always First – Salute the spirit of dedicated teachers (Faculty of ACN) – Real Corona crusaders committed to the cause of creating Institution of Repute and Excellence – Walking the way laid by Honorable Baba Iqbal Singh Ji – Spiritual Nursing – Angels of Healing are being Nurtured in most humble but sure way.